After having lost this tradition in our town (organized until 1944), it was once again recuperated in January 2011, and since then it has been held uninterruptedly on the third weekend of January. In the days beforehand, a huge number of logs and branches is collected in the Plaça del Maestrat, then on Saturday night everything is burned, followed by a neighbourhood dinner in the square. The day after, on Sunday, instead of in church, mass takes place in the square, here animals are blessed before traditional “Sant Antoni coquettes” made for the occasion are given out. This bonfire festival, together with the Trobades de Dracs, has become one of the most important events in the town which attracts the most visitors. 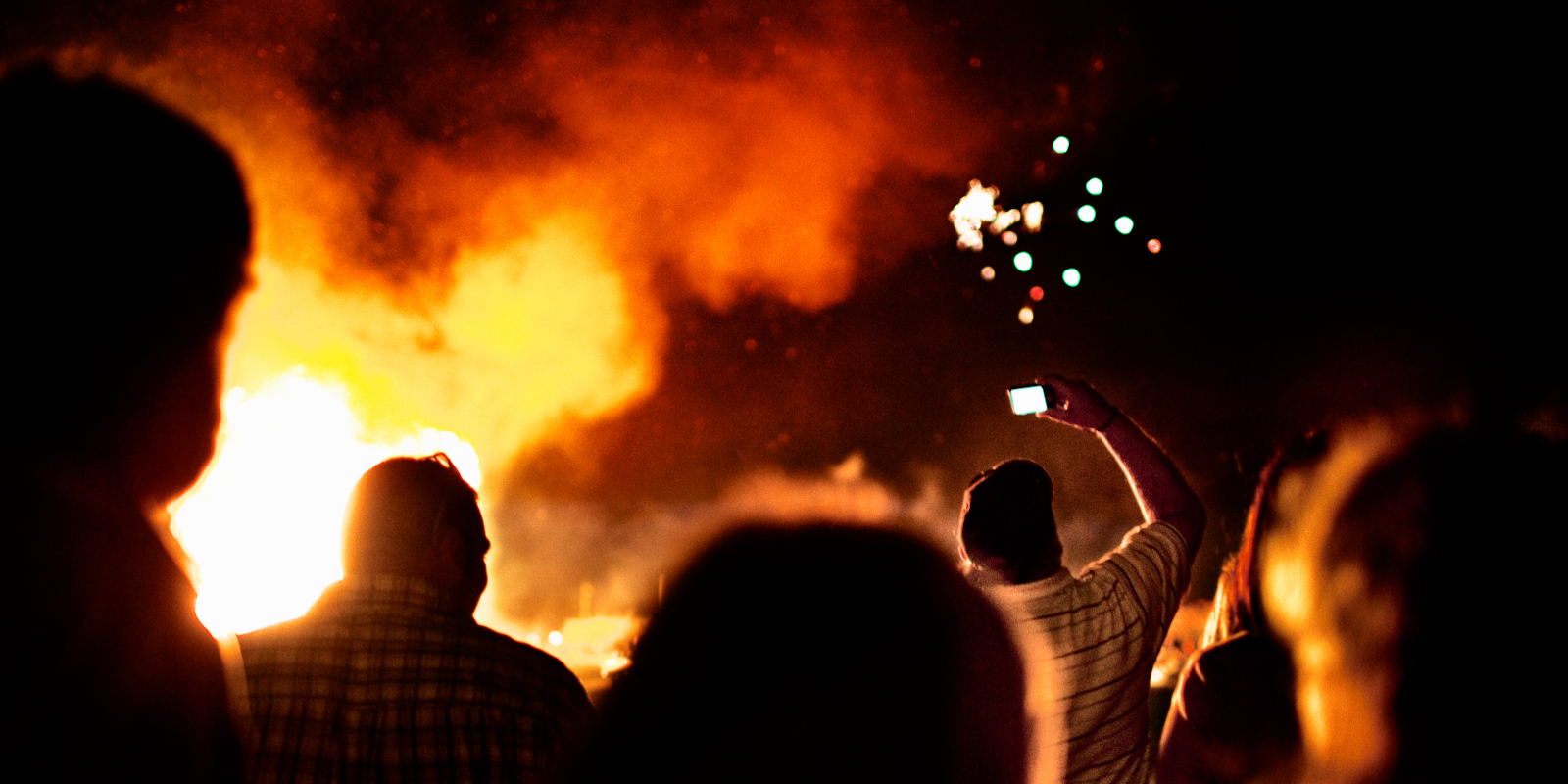 FESTIVAL IN HONOUR OF THE PATRON SAINT SANT SEBASTIÀ

20 January, dedicated to the patron saint of Cervera

Sant Sebastià is the patron saint of the town along with Mare de Déu de la Costa. The day of the Saint is January 20, although the festival celebration is always moved, for work reasons, to the subsequent weekend. Formerly, in addition to the liturgical acts, “corregudes de matxos” were organized and “ballstípics” (dansa, jota and carabassa dances) were celebrated in the Plaza del Maestrat.
Currently, the festivities are divided into two days (Saturday and Sunday), during which the traditional parade of fifth year students takes place (visiting homes, accompanied by a brass band, to collect all kinds of gifts), the bullfighting afternoon at Camí la Sénia (C / Dr. José Moltó), in an improvised “carafals” (metallic structure), with bar service and later the bull with horns in flames. To end the day, the young people organize a big fifth-years party in the town Pavilion, this is a great evening with an orchestra and disco which people from all over the region attend. On Sunday at noon, and in honour of the patron saint, the descent of the saint to the Hermitage of San Sebastián is celebrated, with the presence of local authorities and festival queens. After the mass, there is a procession through various town streets and then the saint is returned to the Church of the Assumption.

The last weekend in February (usually)

Organized by the Cervera Cycling Club, and in collaboration with the City Council and other local entities, this has taken place since 2003, with around 700 people signing up each time. It is celebrated every year during the month of February, when the almond trees are in full bloom, and consists of two routes; one short, of low difficulty (13-14 km.) and another long, of medium difficulty (19-20 km.), along roads, paths, tracks, riverbeds and all kinds of terrain, each year is a different route. Along the way there are different places for water, food and regaining your strength, and at the end a great neighbourhood meal is celebrated in the town Pavilion, where each participant receives their ration of "olleta cerverina" (stew) and other gifts. In short, a perfect combination of sport, nature and gastronomy in the heart of the Maestrat. 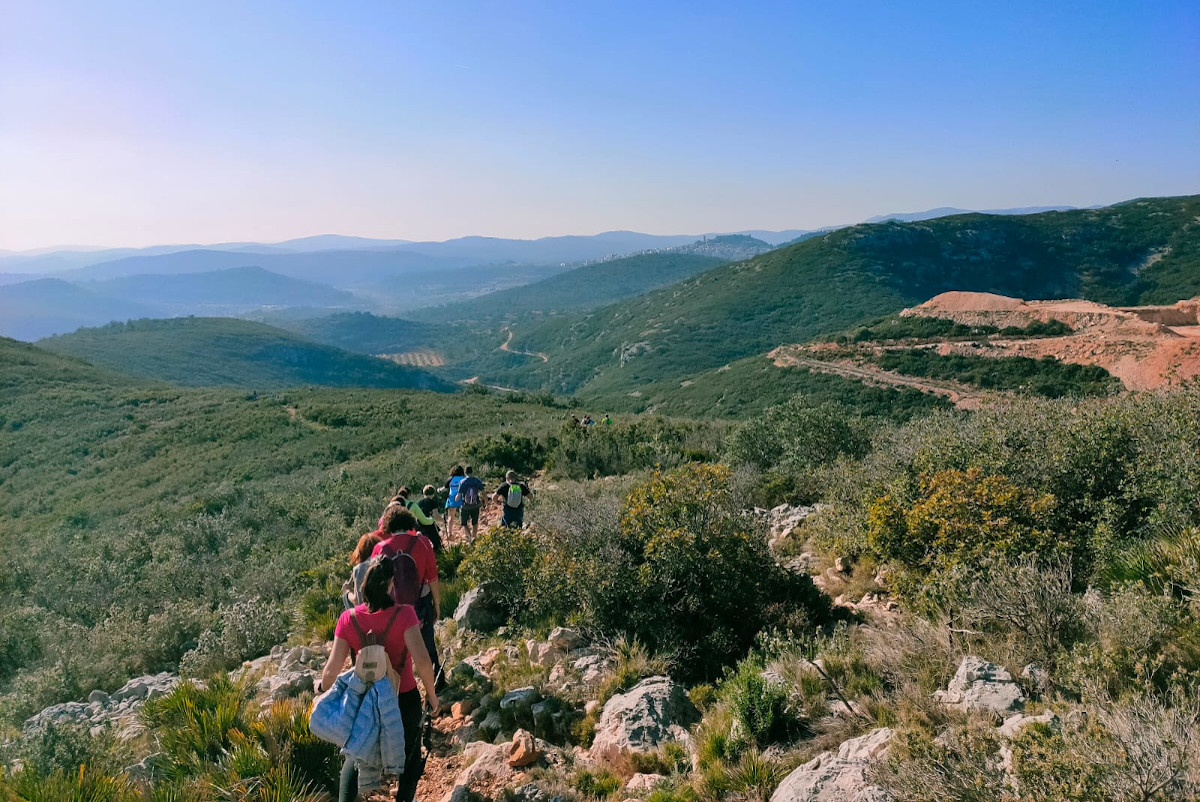 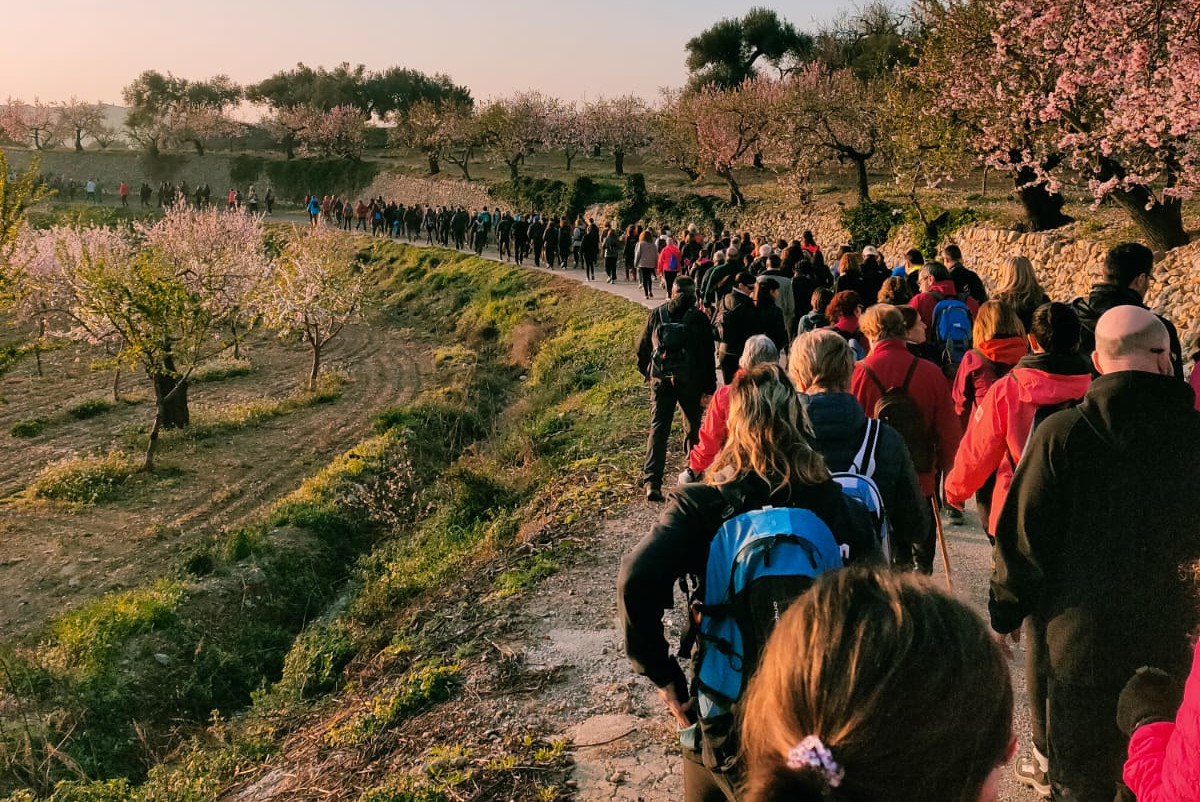 The colourful hoods and robes, the perfect synchronization between the brotherhoods (with their bass and snare drums) and the music band and, above all, the artistic beauty of the precious metal worked images are reasons enough to go to Cervera on Holy Thursday and Good Friday evenings. On each of these days in April the traditional procession in which floats of the Dead Christ, Christ on the Cross and Our Lady of Sorrows can be observed, accompanied by their respective brethren who, to the sound of bass and snare drums, give the whole celebration a collective feeling of meditation and religious fervour. On Sunday morning (Easter Sunday) the well-known Encounter procession takes place, in which the Blessed Sacrament, on the one hand, and the Virgin, on the other, meet, accompanied by their respective entourage, in the Plaza del Maestrat, returning later, all together, to the Parish Church. 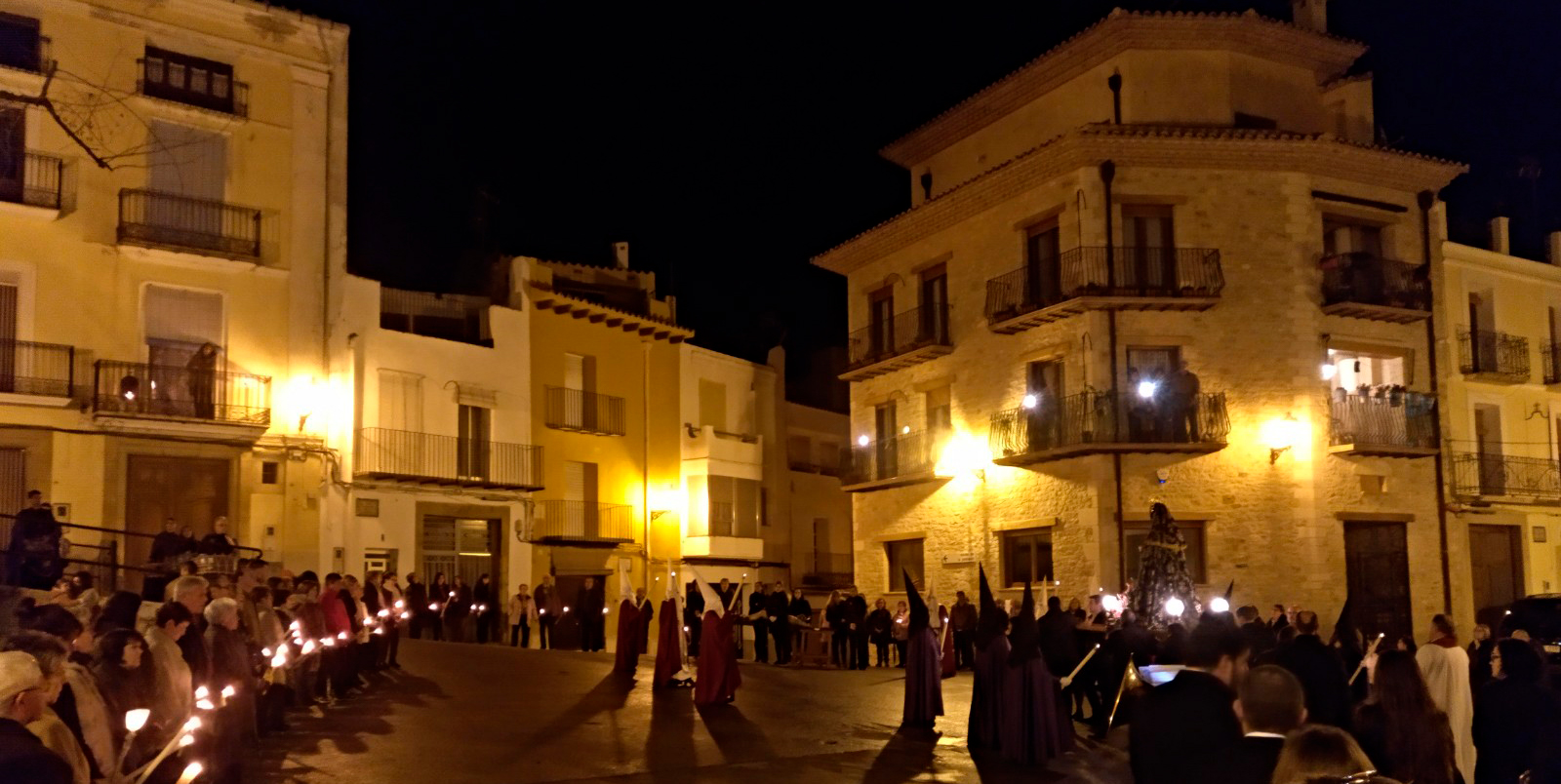 Last Sunday in May

It takes place on the last Sunday in May (formerly May 7) and consists of a pilgrimage in which the residents of the town travel (some on foot, others by vehicle) to the Royal Sanctuary of the Virgin de la Font de la Salut, in Traiguera. Mass is celebrated in the sanctuary itself, with the presence of local authorities, later the Santa Cecília Musical Union give a concert in the Renaissance portico, there is also a popular paella meal in the surroundings of the hermitage and a popular open-air dance marks the end of the celebration.

This annual celebration, held during the first weekend of July, brings together several dragons from other towns (mostly from the Valencian Community and Catalonia), each of which is accompanied in the parade by their corresponding demons, musicians and, above all, fireworks. However, the protagonist and centre of attraction is the DRAC DE LA FRAM from Cervera del Maestre, whose legend-tradition dates back to medieval times.
These days there is also a colourful and busy medieval market (where you can buy all kinds of products from the area), various shows (falconry, visits, games ...), neighbourhood dinner and traditional dances. The last time it was celebrated on 6 and 7 July 2019, more than 3,000 people gathered in the town, thus making it the tourist event which attracts the most visitors. 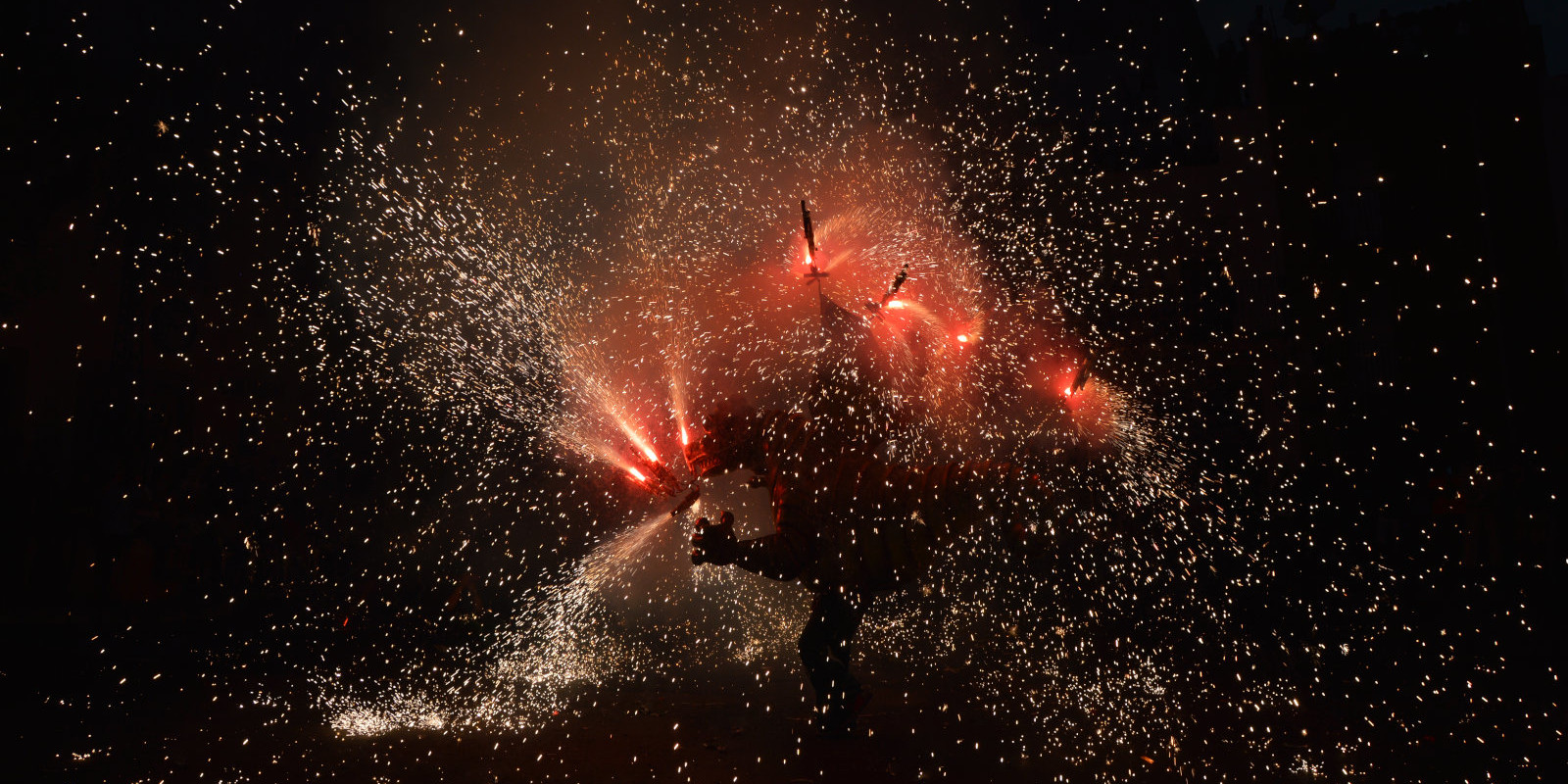 This is celebrated during the first week of August of each year and has become, with the passing of time, the main town festival (regarding Patron Saint Festivities). The activities programmed by the City Council are varied and diverse: proclamation of the Festival queens on the first night of dancing, liturgical acts in the Parish of the Assumption, bull run or "entrada de bous" in the morning, heifers in the square in the afternoon, bulls with horns in flames “bous embolats” at night, open-air dances on the sports court, tradition of sardines in the mornings, the typical dances of the carabassa, jota and dansa, uphill bike race, Vila de Cervera cross country race, various competitions (drawing, racquetball, guinyot, indoor soccer, model aircraft, skittles, costumes ...), exhibitions, conferences, plays, children’s play areas, excursions through the town and scheduled visits, parade of floats, potluck dinners "sopars de cabasset i canadella", plays, a tribute to different organizations ..., and a whole host of performances over ten days in which the neighbourhood participates actively and enthusiastically. Activities which attract the most (usually regional) visitors, are the "bull run" in the morning, the heifers in the Plaza del Maestrat in the afternoon and the "bulls with horns in flames" at night, as well as the Vila de Cervera cross country race and the musical performances at night. 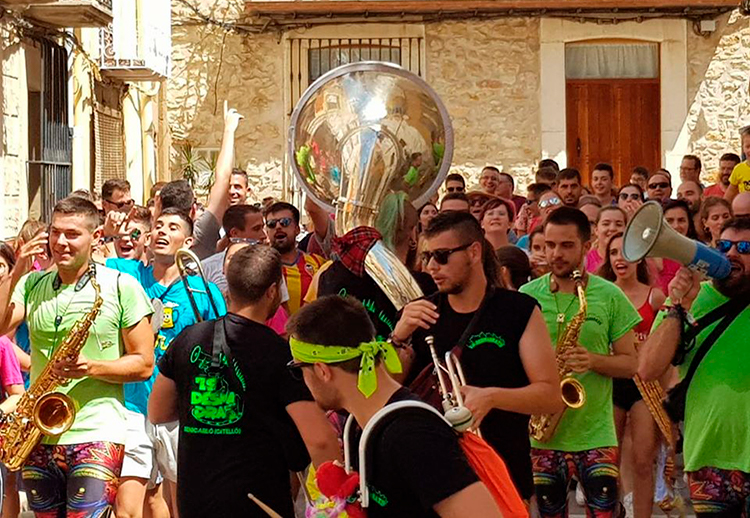 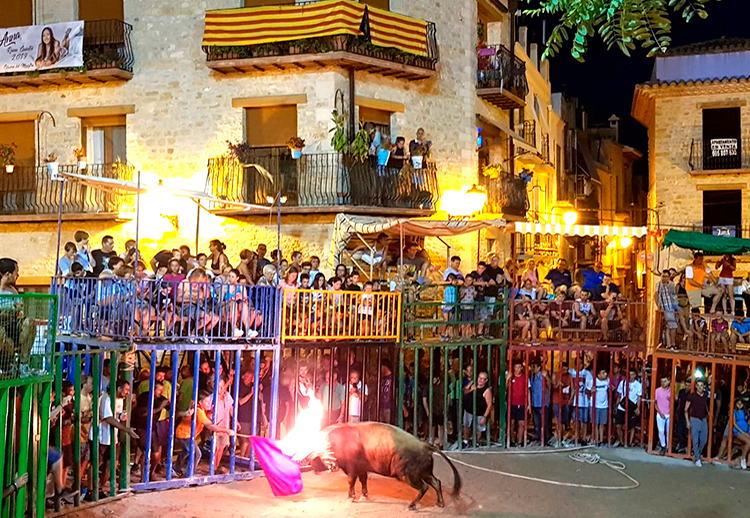 September 9, dedicated to the patron saint of Cervera

Patroness of the town, along with Sant Sebastià. The festival is on 7 and 8 September, but moved for work reasons to the following weekend. Previously, as in the Sant Sebastià festival, typical dances were organized in the Plaza del Maestrat. Currently however, the festivities include conferences and exhibitions, with a popular open-air dance on Saturday night and, more importantly, High Mass in honour of the patron saint, which is celebrated on Sunday morning, with a procession through the usual streets. In recent years, a special feature is the Tomás Monzó Photography Contest, in which residents of Cervera and other towns present photographs on the varied and diverse aspects of recent Annual Town Festivals. 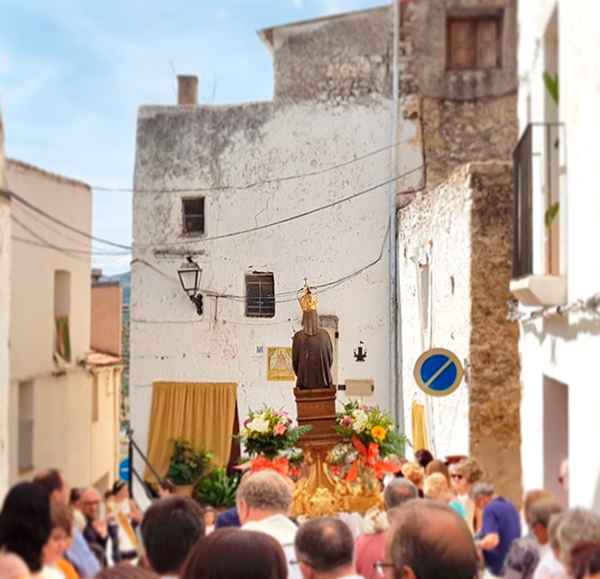 Organized by the City Council during the second weekend of December. Dedicated to local products (wines, nougats, breads and pastries, charcuterie, honey and other gifts) and intended for both local and regional visitors. Depending on the year, it consists of between 25 to 30 exhibitors.